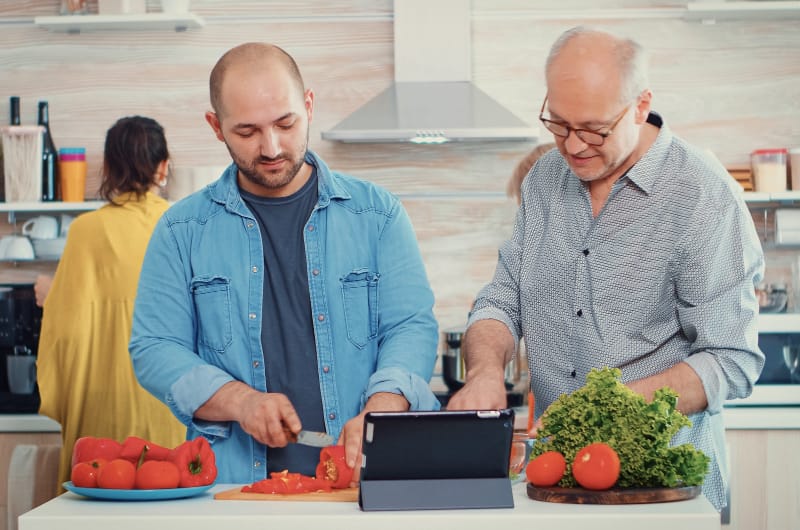 Dealing with your partner’s parents is always tricky. As a new family member, you and the parents don’t know how to communicate your thoughts and ideas about certain things. Having your partner’s support is vital to act as a united front, but you can’t expect them to choose sides. Making a list of what truly is bothering you can help you get to the root of it. Try to talk to your in-laws directly and communicate with an open mind where you need to understand compromise will come from both sides. Dealing with in-laws when you have a baby can be more difficult, but making them know how you wish to raise your children with different values can be achieved by talking to them gradually.

When marrying your partner, you also become a part of their family. These new relationships need plenty of time and compromise to understand each other.

But you’re still new to the family, and your in-laws can sometimes feel overwhelming or annoying to deal with. It’s a similar case for your partner to deal with your parents.

While dealing with in-laws is difficult when it’s only you and your partner, it can take a turn for the worse when you have kids in the frame. In-laws might feel more entitled, and their existing annoying habits can become more challenging to handle.

In such cases, maintaining a healthy relationship is vital so let’s look at how to deal with annoying in-laws.

When becoming a part of your husband’s family, navigating your way through the new family dynamics is complex. Like your parents had their values and beliefs in raising you, so did your in-laws.

Not every family has a similar set of values, which can be tricky to handle. The difference of opinion is bound to rise, and with it comes habits.

While some of these habits are bearable, others might seem too annoying to you to handle.

You might find a few of their habits annoying such as:

These are some of the most common issues, irrespective of being a husband or a wife. But there could be other problems not listed here.

How to get along with annoying in-laws?

Dealing with annoying in-laws can seem impossible, but for the sake of your partner and to save future marriage troubles, you should try to find solutions.

It’s easy with your parents since you’ve known them your whole life and know different ways to deal with them in certain situations.

Instead of stewing in the resentment, it’s better to do something about it!

As juvenile as it sounds, it’s a much better way to look at the issues right in front of you on a piece of paper. It will bring a lot into the perspective. Sometimes we think there’re many things, but they turn out to be fewer when you write them down.

It will also make it easier to see which issues you can accept or let go of and the habits that are a red flag.

Once you’re clear about what habits you must deal with and discuss, it’s also easier to communicate them to your partner.

Once you’ve identified the annoying habits of your in-laws that you can’t in no way accept, the next step is talking to your partner about it.

It can be challenging to talk about it since it’s their parents. But communicating with them is essential for your married life.

There should be a healthy way of communicating. A united front is equally important as you don’t want a partner who’s always and completely taking their parent’s side and ambushing you in front of them.

3. Don’t expect your partner to take your side

You can’t expect your partner to side entirely with you, either.

They understand your point of view about specific things that you find annoying about their parents, but it’s unrealistic to expect them to side with you in such a case completely.

Instead, work together as a team to solve the issues arising.

Your in-laws could have this habit of criticizing the smallest things, like why the kitchen isn’t set up differently, and you might find this annoying. You can ignore some things, but some could be out of line.

It’s important to set boundaries to keep your relationship respectable with them. If you don’t set boundaries, your in-laws won’t know how they’re hurting your feelings and will keep doing what they do.

Though it might be difficult initially, it’s vital to do so for the sanctity of your relationship with them.

Some in-laws can be too involved in your life, and that can present a problem in the longer run. You and your partner need privacy.

If your in-laws barge into your house before letting you know, it’s quite a big issue. Or they could also expect you to visit every weekend.

Maintaining healthy space is much needed. If you’re asking your partner to keep some space from their parents, you need to do the same with your parents.

If you’re expecting your partner to make this sacrifice, you should do the same to let them know you’re in this together.

Every family has different communication styles. If your partner’s parents call them daily, that’s normal for their family, but it might shock you if you’re used to talking to your parents once a month.

You need to understand your partner’s upbringing and family values. While you can ask for some compromise, you can’t expect them to function as you do.

7. Communicate with your in-laws

You can’t always rely on your partner to communicate your feelings to their parents. It might be uncomfortable initially, but directly talking to them can do wonders for your relationship.

Being honest and clear about things hurting you can solve the issues faster. Instead of being blunt, try to communicate politely and listen to their side.

The issues might not get solved in one go, and you might even get into arguments from time to time. But keep the conversation going and try to be as cool-headed as possible.

How to deal with in-laws when you have a baby?

When the in-laws become grandparents, the role changes as every person gains a promotion in the relationship. With the new member’s arrival, there’s a shift in roles, and with it comes issues.

Be firm about how you wish to raise your children and the values you want to give to them. Think about the things you can accept and let go of and what things you can’t tolerate at all.

Your family needs quality time too

They could be asking to spend a lot of time with you and the kids. Then it’s essential to make them understand how your little family also needs quality time.

Although spending time with grandparents will only be better for the kids, if it’s becoming too much where it’s becoming a stretch for you and your partner, it’s better to talk it out.

Instead, you can connect with them in various ways, like video calling every other day and showcasing your kid’s drawings to them.

Some grandparents can be overly pampering their grandkids, and in such cases, it can end up spoiling the kids. While you can let some things slide, if it’s interfering with your style of upbringing, it’s best to limit the contact for a while and have an honest conversation about how you wish to raise your children.

Parents relying too much on their married child

When parents become grandparents, they tend to forget how demanding it is to raise a child. It could be possible that your in-laws are asking too much of their married child, which can take away their quality time from your family.

Try to devise a compromise on how much time is good for spending with the parents.

Grandparents not being helpful

Another reason you could feel annoyed by your in-laws is that they don’t help out as much as they could with the grandkids.

Sometimes, they might not understand it themselves, and even though they have every right not to be included so much, it’s better to ask for their involvement directly and how their help is much needed.

What are the signs of toxic in-laws?

What to do when you don’t want to see your in-laws?

It can be pretty tempting to end all relationships with your in-laws, but this decision can make your partner torn between you and their parents. Before taking such a drastic decision, try to find the root cause of the problem and communicate it calmly to your partner.

Try to find common ground with your in-laws and see if all of you can reach some sort of compromise. If there’re any sensitive issues, let your partner know so you can present a united front.

If nothing is working, suggest family therapy for your partner’s sake.

Your spouse’s parents can be tricky and sometimes annoying to deal with, but you must find some common ground with them.

Whatever habits you find annoying, it’s always better to act as a united front in front of their parents. You can’t expect your partner to take your side, but to have a healthy relationship, you and your in-laws must compromise on the issues.

It’s easier said than done, but honest communication with your in-laws and trying to understand their point of view can help you resolve many of the issues.