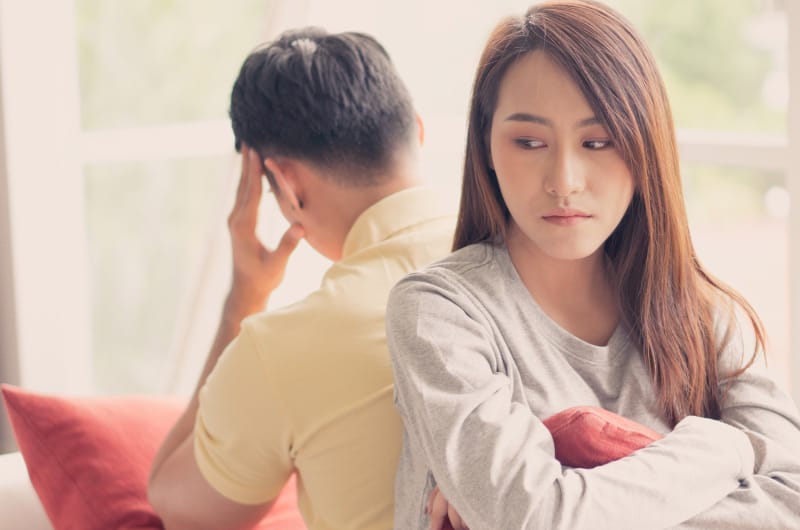 Marriage between two people also binds the two families, and like every relationship, there needs to be mutual respect for one another for it to work. Your husband’s family could be disrespectful in many subtle or not too subtle ways, but if he overlooks this behavior, it could also impact your relationship as a spouse. Understanding why he behaves this way is crucial in understanding the steps you need to take to stop this kind of behavior from his family. If you can’t solve the issue on your own and your husband doesn’t seem to support you, then seeking a couple’s therapist can help you find a healthy way for them to understand and support you.

Respect is one of the crucial pillars of marriage.

Spouses should respect each other and each other’s families and vice versa. It’s what keeps the relationships going without any hurdles.

Disagreements are bound to happen between you and your in-laws, but if they start disrespecting you in any way, that’s not a sign of a healthy family relationship.

Your husband might sometimes take your side and other times his parents.

But if your in-laws cross the boundary and disrespect you and your husband keeps quiet, then it’s not a good sign for a healthy marriage.

When your husband’s family disrespects you

Even though your partner might appreciate you, the same doesn’t go for his family. Your husband’s parents might not like you as a person or the decisions you take for your family.

While they might not say it directly but they’ll show their unpleasantness with this marriage in any way possible, including disrespectful behavior.

They could be disrespectful of how you dress, work, or plan to raise your child.

Slight intervention in your personal family life is natural, but when they can’t see your point of view or disregard your way of life, that could also be disrespectful.

As it’s his family, you might even let it slide a few times, but when it happens in front of him, and he doesn’t come to your defense or show his support, it can leave you feeling humiliated.

This will allow his family to disrespect you more and leave a dent in your relationship with your husband.

4 reasons why your husband lets his family disrespect you

These reasons are not justified, but even then, you need to understand why your husband could be behaving this way to find the appropriate solution.

In marriage, no spouse should let their partner be disrespected, be it from a stranger or their own family.

But there could be reasons why your husband is behaving this way!

When you’re mad at your husband for something he did, does he seem to listen to everything you say just so you can stop the accusations? This must be your husband’s way to avoid conflict at any cost.

This could be their behavior established while growing up in a household where parents used to fight all the time, so this became their coping mechanism.

They don’t want to take sides between their family and wife and seek peace by not supporting anyone.

Even if they see disagreeable behavior from his family, he won’t openly call them out for disrespecting you to maintain peace and avoid his participation in the conflict.

There even might be certain things about him that his family isn’t aware of because they might disapprove of it.

If he likes smoking, but his family despises this habit, they might hide it from them just to please them. So it could be this nature that does not allow him to say anything to his family when they disrespect you.

He had much rather kept quiet if not agree with them to maintain this other pleasing image in front of his family.

This is a common term everyone must be familiar with, and sometimes it’s hard to know if your husband is a mama’s boy before you get married if you don’t see him with his parents often.

Usually, it’s a very subtle thing they might hide easily from their friends and life partner before getting married to them.

This immature dependency relationship is toxic for the other spouse in different ways.

The signs indicating this includes:

In such cases, if your mother-in-law is the one disrespecting you, it wouldn’t be shocking for your husband not to say anything. They might even go as far as agreeing with their mother’s behavior right in front of you, humiliating you even more.

Your husband could be dependent on his blood family for him to not say anything when they disrespect you.

It could either be emotionally or financially, and he feels he’s dependent enough not to take a stand for himself or voice his opinions on anything.

He fears that this dependency could be severed if he might voice his opinions.

6 ways to stop the disrespect

You might feel trapped in such a situation when your husband isn’t supporting you.

For whatever reason, your husband might feel there’s nothing wrong when your sister-in-law says you should have put your kid in the school the whole family went to rather than the school you believe was right for them.

You might have your reasons, and his family isn’t ready to understand your views and outright disrespects your decision.

Under such circumstances, you would want your partner to support this decision, but he might keep quiet.

He might not be able to read the room or see your discomfort.

It’s best to communicate your feelings to him and let him know how things his family says are disrespectful in some ways.

While you might have to find ways to adjust with his immediate family members, with relatives who aren’t that close to him, you can choose to tackle the situation differently.

Whenever there’re large family gatherings you can choose not to meet them so often.

You don’t need to meet family members who show disrespect to you.

If your husband isn’t supporting you in front of these members maybe you can discuss some boundaries with him.

Things you can tolerate and not tolerate so instead of actively supporting you maybe he can change the topic of conversation in such gatherings.

Your husband might ignore the situation, but you can take a firm stand. If the situation allows, you can be firm and let his family know the reason behind your decisions they disapprove of.

Sometimes letting someone know about their behavior directly can be much more impactful and might stop them from disrespecting you again.

This doesn’t mean you disrespect them but show them why you stand by your decision and stand your ground.

4. Communicate with his family

Of course, communicating with his family is the direct way to handle the situation. If your husband can’t take a stand or support you, it’s best to talk to his family directly.

Try to clear up any misunderstandings or miscommunications causing them to behave this way. Spend more time with them to learn more about each other.

You can maybe let them know what topics are sensitive for you and why you chose a decision they dislike.

Talking them to in-person face to face is much better than having a discussion at family events or gatherings when there’re other family members.

One way to handle this is to limit your contact with the family members who disrespect you.

When there’re family gatherings, you can choose to interact with other family members and only interact with those who are disrespectful in a group setting rather than one to one to divert the conversation when it starts becoming heavier.

Limiting contact could mean limiting one-on-one contact until they realize or understand how you deserve respect and give a chance for reconciliation.

When nothing is working out in your favor, and you constantly feel attacked by your husband’s family where he’s not taking any steps to support you, understand the situation, or make his family understand, you should seek professional help.

You can go with your husband to a couple’s therapist and let them know everything and how your husband’s neglect makes you feel.

Human emotions are complex, and we cannot depend on ourselves to solve each problem every time. Seeking help this way is, in fact, quite healthy for everyone.

Who comes first in marriage, wife or mother?

It depends on the kind of relationship your husband has with you and his mother and the situation where he needs to side with you or his mother. There’s no right or wrong way of a husband choosing to support his wife or mother and is very much dependent on the situation at hand.

What’s important is how he handles the situation and how well he understands both you and his mother and communicates with both of you.

The ultimate solution is to solve the issue, listen to both, and talk to them in any given situation.

You’re both critical people in his life, and it would be unfair for him to be biassed towards one relationship over the other.

What does it mean when you don’t like conflict?

Conflict avoidance is a coping mechanism people form over the years of growing up as a strategy to please people around them.

It stems from avoiding upsetting people. Whenever there’s a disagreement or possibility of any conflict, they would disarm themselves and side with your opinion to avoid any possible dispute.

It comes from growing up in an environment that was dismissive and hypercritical.

When your husband’s family nitpicks on every decision of yours and disrespects you in subtle ways, it can be pretty hurtful and difficult to deal with.

It becomes more humiliating when your husband is there and does nothing to support you.

There could be varied reasons why he chooses not to say anything but the most important thing is how to find a solution to show him how this isn’t acceptable behavior.

He needs to understand that you’re a team, and there’s a need to support each other even in front of one’s family.

You can try communicating with him or his family, but if things still don’t change, it’s right to seek professional help with your partner and make him realize how toxic this is.

Disagreement is always acceptable, but disrespecting someone is not tolerable, be it from a stranger or his family!