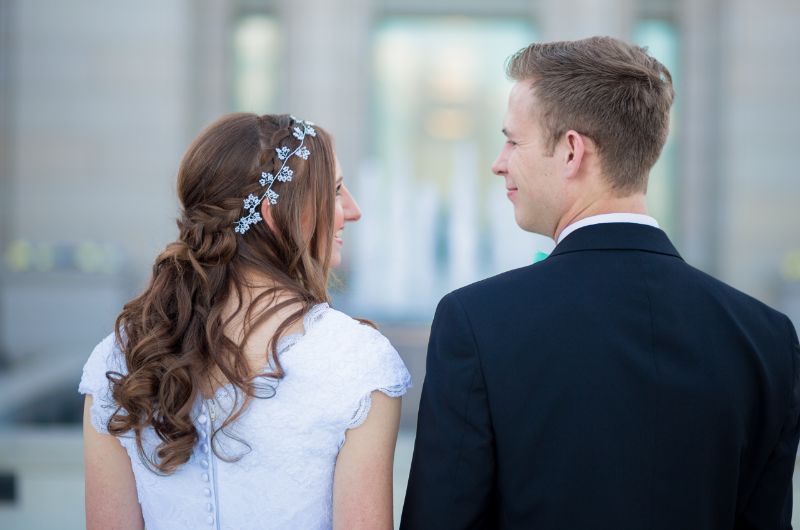 There’s no specific age set by the Mormons and their community by which adults should get married, but they usually do it before they turn 25. The biggest reason is their teachings of The Church of Jesus Christ of Latter-day Saints believe that families are important—so important that family is at the center of gospel learning. A family influences the happiness and well-being of its members, impact the society around them, and continues to have significance even after death. So while there’s no compulsion to marry young, they can’t help but follow suit. If they don’t, there’s a strong disconnect as they get older without getting married, which impacts their position in the community and the Church.

In 2021, the average age of marriage among women in the United States stood at 28.6 years, and for men, it was 30.6 years. When compared to the median age for Mormons stands at 22.

This vast difference is the norm when it comes to Mormons; in fact, getting married later than 25 makes something wrong with you in the eyes of the Church and society.

While the rest of the religious groups don’t focus much on getting married early, why is it a trend in Mormons, and what drives them to get married so young? Let’s take a look.

What is the importance of marriage in Mormons?

When it comes to Mormons, their sole belief is that a marriage between a man and woman forms the fundamentals of God’s plan for His children. The families associated with the Church serve as the foundation of society and the Church.

Under their model teaching, they’re told to focus on the birth and nurturing of children once the head of the family, the father, and the mother, are married.

According to their teachings, they are taught that starting a family unit as early as possible is good and right and as God intended. That a happy and healthy family makes the world a better place.

A family will never be as perfect as Him, but it can be ideal if it consists of a couple who unconditionally supports each other as equal partners and raises their children with love and attention.

Once you start a family, the relationships formed are eternal, and even death here on earth can’t stop its continuity in the next life.

What is the reason for early marriage in Mormons?

As members of the Church, the idea of early marriage is rooted deep, and it’s also due to the counseling received from their church elders.

It’s not a good or a bad idea, but it’s something that they genuinely believe is something they should do on time.

According to their timeline, they’re expected to get married during their undergraduate years. If they don’t, there is a strong disconnect with the other community members, followed by judgment.

Their Church has a prophet and 12 apostles who are ordained to lead the Church and to provide the Church with revelation from their Heavenly Father.

In A Proclamation to the World, the Church laid out its doctrinal beliefs on marriage which clearly states that marriage between man and woman is essential to His eternal plan.

They’re encouraged not to delay marriage. When it comes to achieving goals in life, they’re told to believe that that shouldn’t hamper their opportunity to marry the right person.

As a matter of fact, both marriage and career can be achieved with hard work, sacrifice, and planning. That your companion can support, which leads to greater success.

Although there’s no defined age stated in their doctrines, there’s still indirect peer and community pressure to do so before the age of 25.

With society advancing and people becoming more aware of issues, there’s a shift in getting married within certain families. Women are postponing their marriage until they’ve achieved their goals first.

It’s because women who choose to get married young usually end up not completing their degrees and getting the proper education required to get a good job somewhere to support themselves financially.

When this doesn’t happen, they depend on their husbands, who is the family’s sole provider. With kids to handle, they end up staying married even though they’re not the same person they used to be when they married.

Financially speaking, it makes sense. There are a lot of changes that happen in the early twenties too. But according to the Church, members are taught to get married young as young adults reach the sexually mature age.

Sometimes it does end up working in the couple’s favor, but other times young adults change drastically by the time they’re 30, which makes them unhappy in their marriage due to rushing into it too soon.

When is the right time for marriage for Mormons?

Getting married young or at an older age are things that shouldn’t be publicly shamed. There’s no right time to get married.

Marriage is an institution, and if two adults are willing to make things work and are ready to handle the responsibilities that come with it, they should be left to get married whenever they wish to do so.

While amongst Mormons, there is a trend to get married early, it’s not entirely a bad thing if they feel right about it.

But if they feel rushed into it and have this internal conflict regarding it, then postponing marriage is always an option as long as they don’t let peer pressure get to them.

There’s a trend where the older the members get without getting married, the closer they are likely to leave the Church or go inactive.

The culture of the Church can push away people as they’re more focused on catering to the needs of the family units.

So when someone around 30 is still unmarried, they could feel stagnation as there’s no progression while those younger than them are getting married. Even their friends have kids and are well into married life.

How long do Mormons date before getting married?

Though there’s no specific time limit on the dating period before marriage amongst Mormons, it’s still believed that dating for a shorter period is the best.

If they date too long, people lose interest in marrying. Since there is a common practice of marrying young, they don’t even think about dating for long as they have to get married, with it becoming their priority.

Can Mormons make out before marriage?

Any physical relationship is a big no in Mormons, and they aren’t allowed to do that. However, they’re allowed to make out or have sex and have babies as soon as they get married, irrespective of age.

Do Mormons use birth control?

Mormons don’t believe in the use of birth control as, according to their belief, heaven is full of millions of spirits awaiting an earthly body.

Things such as birth control and abortion are forbidden. Since the female body is considered the tabernacle of the spirit and the residence of God’s spirit children, a high priority is given to prenatal care.

What is the purpose of a Mormon temple?

For Mormons, the temple is a very sacred space. It’s where heaven and earth meet, and it’s a way for them to become closer to God.

In Mormon temples, Latter-day Saints learn about Jesus Christ, the purpose of life, and the importance of marriage and family.

Once a couple is married and sealed in a temple wedding, any children who are then born to them are automatically sealed to them at birth.

If children are born before the couple is sealed, they can later participate in a temple dealing with their parents.

Can a Mormon marry a non-Mormon?

Any Mormon can marry a non-Mormon, but they can’t do the sacred temple marriage because both need to be Mormons.

Mormons are very religion driven, especially when it comes to getting married early.

Getting married early is a way to start their family unit as early as possible, as that’s something that’s of great significance not just in God’s eyes but also in their community.

While there’s no compulsion for them to get married young or by a specific age, there’s peer pressure or indirect pressure from their community.

By not getting married young, those who wait might feel left out of the Church and amongst their friends.